The end of another era will soon be upon us with the demolition of the Mayfair Hotel and Hymmen Hardware buildings.  While much has been said about the decision to demolish the Mayfair and the adjacent building, I thought that it would be nice to look back at what was there.

The Mayfair was built by Edward Lippert, son of Lippert Furniture factory owner, George Lippert. Edward was born in Preston, and later raised in Berlin. He attended St. Mary’s school, leaving at age 12 to learn the upholstery trade. He eventually moved to United States where he worked in various undertaking and furniture establishments.  Lippert returned to Berlin in 1905, to join his father’s furniture factory, which had been located on Louisa Street. During his lifetime, Edward owned several businesses and properties in Kitchener, Toronto, Calgary and Texas, served a short-time as a Kitchener city alderman, was a senior member of the undertaking firm, Lippert and Hunter, and chair of the Kitchener Public Utilities Commission.

Edward’s foray into real estate included the 1905 construction of a three-storey building, located on the southeast corner of King and Young Streets. He started a retail furniture and undertaking business in this location, the future home of the Mayfair Hotel. Interestingly, his 12 September 1935 obituary in the Kitchener Daily Record noted that “Mr. Lippert’s real estate purchases were always followed by improvements. It was always his policy not to allow his buildings to become dilapidated.”

Lippert closed the furniture store and undertaking business at King and Young and opened the Mayfair Hotel on 11 September 1929. During the 1920s, he had added three storeys to the building. He died on 11 September 1935, on the sixth year anniversary of the opening of the hotel. He was survived by his wife, the former Angelical Noll, and four sons and a daughter.

The Mayfair Hotel was sold by the Lippert family in August 1945 to Toronto investors, including former Metropolitan Toronto Chair, Fred Gardner (after whom the Gardiner Expressway is named). In late 1963, the hotel was sold to Harry Greenberg of Guelph and Louis Senkel of Toronto. 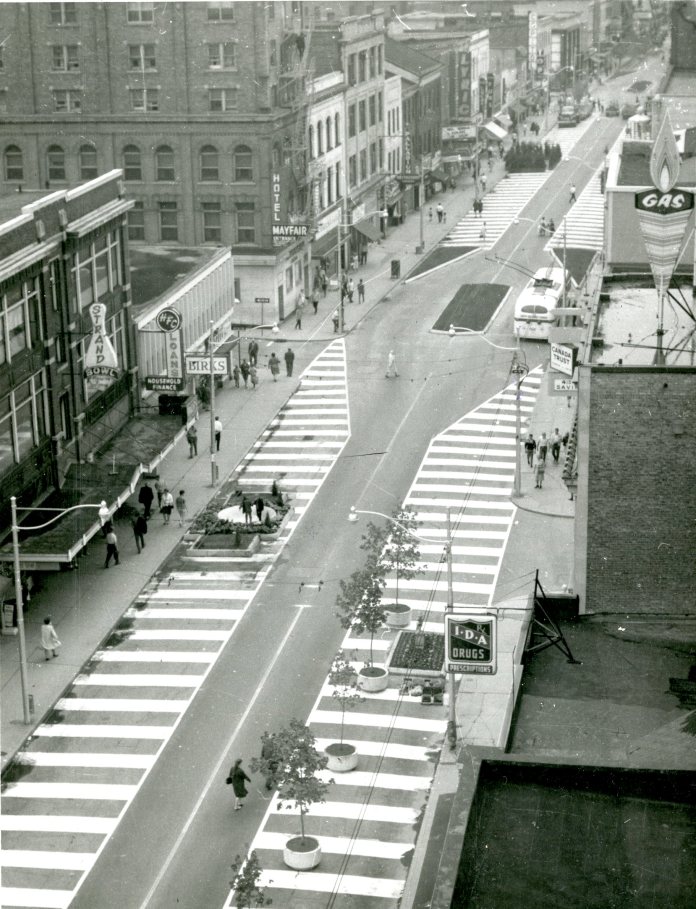 The building was sold to Joseph Stanicak of Hamilton around 1973. Extensive renovations took place in 1975, but the business failed to relaunch after a fire and default on the mortgage. John Sylman purchased the hotel in 1977.  Rumours of its potential demolition swirled for years as the hotel struggled. It was sold to Cal Dicks of Cambridge in 1986, who operated it until May 2001. The Mayfair was then purchased by the City of Kitchener. Long-term residents of the Mayfair were eventually moved out by 2007. The building has since remained vacant.

Over the years, the Mayfair has had its share of financial troubles, neglect, ownership instability, and liquor licensing woes. Such a sad end for a hotel, advertised in 1929 as having “112 rooms, all modern”, which later grew to include a shoe shop, drug store and doormen wearing white coats and boutonnieres.

Image of the P. Hymmen Hardware store which appeared in the 31 October 1960 edition of the Kitchener Daily Record . The image is believed to be from 1900..

The P. Hymmen Hardware store was located next door to the Mayfair. In 1907, Berlin tinsmith, Peter Hymmen, and son, Peter, moved their hardware store across King to 158 King Street West. The elder Hymmen, who had been in business since the 1850s, was a skilled mechanic and craftsman. He reportedly created a suit of armour from tin for a local teen, who wanted to attend a masquerade ball at the German Club. The elder Peter died in 1930, but the business was continued by family members until October 1960 when it was sold to William D. Land.  The shop closed in early 1963.

Redevelopment plans, announced by the City of Kitchener and Andrin Homes in 2011, included a boutique hotel, restaurant and a whiskey bar, which incorporated the heritage exterior of the Mayfair and Hymmen buildings. Despite the City’s designation of the site under the Ontario Heritage Act, recent damage from a burst pipe and newly discovered structural deficiencies have rendered the buildings a public safety danger. Sadly, the demolition of these two structures is expected in the coming week.

7 thoughts on “Of Furniture, Hotels and Hardware”