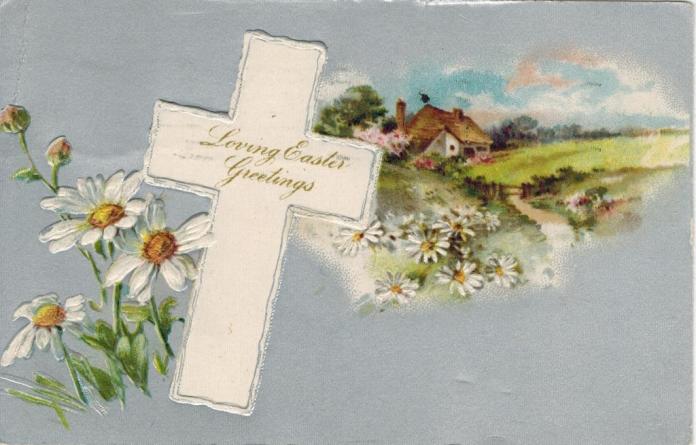 As spring finally makes (or rather, another) appearance, I thought that I would share this Easter postcard, which I found in the Kitchener Public Library collection in the Grace Schmidt Room. The simplicity and serenity of the images harkens back to a quieter day and age.

The reverse of the postcard also expresses simple wishes from Gertrude Totzke to Miss Enetta Stolz, who was living on Peter Street in Berlin in the spring of 1910. Enetta Stolz (or Stoltz) was likely Susannah Enetta Stoltz, born in 1 January 1882 in Wilmot. She was the daughter of Jacob F. Stoltz and Wilhelmine Gerbig. Following Jacob’s death in 1888, her mother married George Heimpel.  According to the 1911 Census of Canada, Annetta Stoltz was working as a servant in the home of Alvin and Elizabeth Cressman in Waterloo.

According to the Ontario Cemetery Project, Gertrude Totzke is buried at Mount Hope Cemetery in Kitchener. Her gravestone lists her life years as 1894-1911, making her almost 17 years old at the time of her death. Gertrude Elizabeth Totzke was born on 21 June 1894 in Berlin and died on 13 April 1911 at her parents’ home at 83 Church Street, of a blood disorder. Her parents were Carl Totzke and Louisa Frank.

However you celebrate this holiday weekend, we’d like to extend our best wishes for peace, health and happiness!

As the holidays are upon us, I wanted to share this Christmas postcard, mailed 100 years ago today, from Berlin to Galt.  It was sent by Minnie Gerbig to Enetta Stoltz of Galt.   I love its simplicity and quaint message.

From all of us in the Grace Schmidt Room, have a happy, safe, and healthy holiday season!

P.S. for those of you interested in reading the message, I’ve rotated the postcard below: 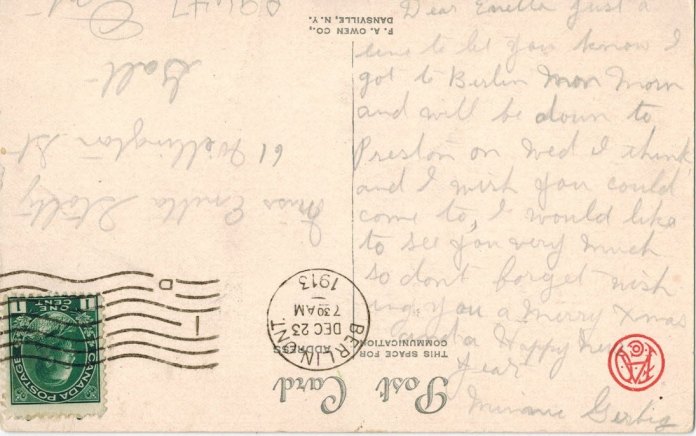 Just a line to let you know that I got to Berlin Mon Morn and will be down to Preston on Wed I think and I wish you could come to, I would like to see you very much so don’t forget wishing you a Merry Xmas and a Happy New Year.